Christmas Pressie
As an extra special Christmas present to you all, here is a fascinating photo of our area from circa 1960. Most likely it was taken by Hans Cassini of Rex Roberts Photographers, who lived on Farmhill Road. Can you spot your house? Can you also spot Farmhill House, which was the British Ambassador’s Residence? (Draw a straight line up from Roebuck Park House, which is now also gone.) Also check out the football pitch on the future IGB land, and notice all the vegetable patches and the lack of cars!

Christmas Get-together
We had a great event down on the Green in front of the shops for our Christmas event on Saturday 8th December. The weather wasn’t the best admittedly, but somehow we all survived. The cleaner-up-ers beared the brunt of it, that’s when the real rain came.

The swag-makers in the first part of the afternoon put together some lovely creations for their front doors, and later on Santa wowed the crowd of kids with his sparkling Christmassy chat and selection boxes. The mince pies, pastries and mulled wine were extremely tasty, and went down a storm.

It was great to see so many neighbours out enjoying themselves, and thanks to all who turned up. An even bigger thanks to all those who helped out in their various ways. Have yourselves an extra glass of Baileys tonight, you’ve earned it.

We collected €255 for the Peter McVerry Trust, thanks to all who donated.

So let’s forget all about Brexit, Trump, drones etc. for a few days, and have a very Merry Christmas and a Happy New Year!

P.S. If anyone has any information as to the whereabouts of one of our wooden pallet Christmas trees, please let us know. It was last seen being bundled into the back of a blue van at 3.30am on Sunday! 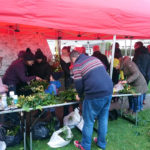 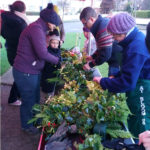 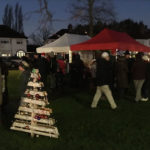 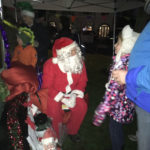 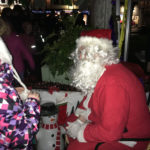 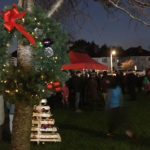 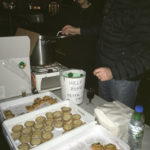 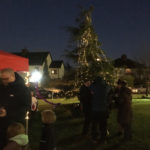 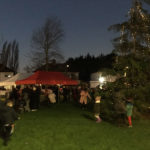 This event was kindly part-supported by Dún Laoghaire-Rathdown County Council.