This article is reprinted, with kind permission, from the Easter 2016 issue of ‘Celebration/ Ceiliúradh’, the Holy Cross Parish magazine.

The March 1969 issue of AONTAS, a Holy Cross Parish monthly newsletter featured an article on a then parishioner Christopher Brady. It told the story of
how he became involved in printing the 1916 Proclamation. Then 81 years old, he was still hale and hearty and, up to recently, he had been an active member of the Sodality. He recalled easily those
stirring times then 53 years ago.

We felt it was worth finding out more about Christy and reprinting the article. The article was written by John McEvitt who lives next door to Christy’s son, also Christy and now 91, still living in the family home on Mount Carmel Road.

Christy, born in 1888, was originally from Little Mary Street, Inn’s Quay, and like his father became a printer and worked for the printing firm of Alex Thom & Co. Aged 27, he joined the IRB (Irish Republican Brotherhood) in early 1915. Shortly after, a fellow member, Patrick Daly (a compositor), introduced him to James Connolly. Christy was given the job as printer for the Irish Transport and General Workers Union in Liberty Hall where he printed their weekly paper ‘The Workers Republic’ as well as many union requirements including “seditious” items that other printers wouldn’t do because they were raided and had plan damaged. Despite not fighting in the Rising, Christopher Brady became a central figure to the story of the event. He was responsible for actually operating the press that printed the Proclamation in Liberty Hall. Fearing raids from the police, he was under an armed Irish Citizen Army guard. Connolly gave him an automatic pistol for his own protection.

The Aontas Article from March 1969
“Christy, together with Michael Molloy and William O’Brien, helped to print a paper called ‘The Worker’s Republic’ for James Connolly in Liberty Hall. On Easter Saturday 1916, as Christy was going to get his bicycle repaired on the Quays he met Commandant James Connolly on the steps of Liberty Hall. “I want you and your two companions to do a very important job tomorrow night, Christy” he said.  “On the following morning Connolly brought the three men to a room in Liberty Hall where they were introduced to Commandant Thomas McDonagh who proceeded to read the first draft of the 1916 Proclamation. When he had finished McDonagh asked the men if they were willing to print this document. All three knew it meant war. Christy recalls answering “I consider it a great honour to do such a heroic job.” Commandant McDonagh then asked if the men should be sworn in. Connolly replied, “I can vouch for these men’s secrecy.” Then McDonagh said, “You men will never be forgotten.”

“Christy and his companions were locked in Liberty Hall on Easter Sunday and on Easter Sunday night working on the Proclamation. The first difficulty they met was that one of their type fonts was short of a capital E. Christy went out and bought some sealing wax. Using this he was able to convert an F into an E. The result was a slightly blurred but satisfactory E. Christy can tell a genuine copy of the Proclamation from a reproduction by looking at that letter.

“He recalls an interesting incident that occurred on Easter Sunday night. Countess Markievicz burst through the door, where the men were working, with a pistol in her hand and a telegram in the other. “I’ll shoot McNeill,” she said, as she showed the telegram to Connolly. Connolly replied “If anything happens to McNeill, I will hold you responsible.” Christy was unable to say what was on the telegram.

“There were 1.500 copies of the Proclamation printed. These were made into two bundles and handed over to Miss Helene Moloney in Liberty Hall. The printed copies were posted all over the city on Easter Monday morning. One of the original copies can be seen in the National Museum, Kildare Street, and it is autographed by Christopher Brady, Michael Molloy and William O’Brien.”

“A fitting tribute was paid when his Excellency the President recently visited him at Holy Family Home, Roebuck Road where Christy now resides. We wish him many long years. It is good to have a man touched by history, living in our parish.”

In a later document submitted when seeking a 1916 medal (which he did not get), Christy told how Connolly instructed that all loose papers were to be destroyed by him. Then after three sleepless days he headed out to Howth. “I had a tent there I used on odd nights to throw off suspicion on me and as part of earlier precautions against British spies.” Next day he walked home to Little Mary Street – no trains or trams were running. On the Tuesday he noted some “shawlies” pointing his house out to a party of British Military. He escaped, as did his brother who was in the Jacob’s Factory garrison, but his father was arrested – being a printer who might have been involved with the Proclamation printing.

“So, as the much wanted man who had printed the seditious Proclamation I went on the run for six months sleeping wherever I could find friendly shelter. Later Joe Stanley employed me on work for the Volunteers in the next phase of the war of Independence:’

Eventually, having worked briefly with various printers he got a job as printer in the Bank of Ireland in 1922 where he remained for 36 years. In the 1950s he came to Mount Carmel Road and spent his last days in Roebuck Castle with the Little Sisters of the Poor where he died in December 1974. His funeral was in Roebuck Castle. He rests in Glasnevin Cemetery. 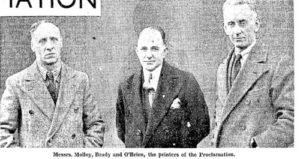