Well, despite the North Pole weather that day, we had a great turn-out for our double Christmas event on the 9th. Lots of kids got stuck into the swag-making and bauble-hanging in the afternoon. A big crowd turned up later on, for the second part of the day, for a chance to sit on Santa’s knee (and to sample the mince pies and mulled wine too).

We had some beautiful carol singing to add to the festive mood – thanks to Helen Maher’s sisters and friend for bravely taking this on! Santa turned on the Christmas lights using his special glittery Christmassy powers, much to the delight of all the kids, who by that stage were sprinting laps of the Green fueled by Cadbury selection boxes. Copies of a local memoir were handed out. Thanks to long-time resident Mrs. Margaret Mooney of Farmhill Road for writing this for us. If you didn’t receive a copy, you can read all about 1950’s and 60’s Goatstown here.

Thanks very much to the organisers of this event:
– The Tidy Districts’ Team for the swag making, and for decorating the green so beautifully.
– Helen Maher and Suzanne Cotter for organising the later event.
– Everyone else who helped out in various ways.

Thanks very much too to Dún Laoghaire-Rathdown County Council for part sponsoring this event.

The collection for the Peter McVerry Trust amounted to €356.

If you, or your kids, are missing any gloves, hats, etc., ask in Lynam’s. Paul has a box of things that were left behind that he’d like to return to their owners!

So all that remains is to wish you all a very Merry Christmas and a Happy New Year.

(Apologies for the terrible quality of these copies of the photos. They do not reflect in any way the quality of the original photos, which can be seen in Lynam’s window! Thanks to Wendy for being our unofficial photographer!) 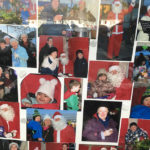 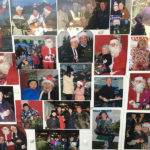 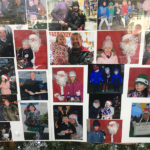 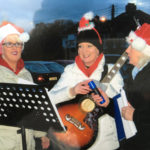 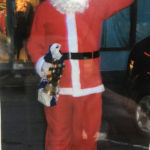 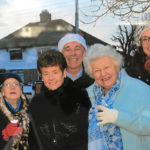 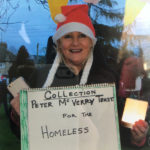 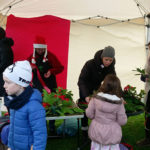 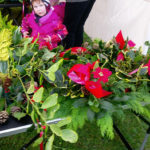