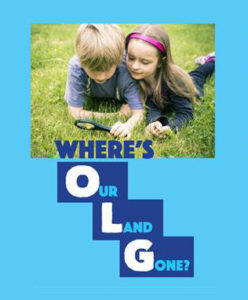 If you would like to support this campaign, please contact all DLR Councillors and let them know how you feel about this issue. A copy and paste list of the Councillors’ email addresses, as well as a sample template email, can be found here.

That evening a “sold” banner was put on the “for sale” sign in front of the school. It is being reported in the media that the 5.4 acre site has been sold to Durkan’s, or at least, contracts are reported to have been signed. The price being reported is €13 million.

It was an extremely informative meeting. After an introduction and background details were given by the group of parents who organised the meeting, all public representatives spoke. This was followed by questions and comments from the audience. You can read the minutes of the meeting here.

There is huge concern among OLG parents and local residents that the development of this land for residential housing will cause multiple problems.

Cllr. Karen Furlong proposed that an emergency motion be raised at the next DLR CoCo meeting on June 12th. This motion, which will be a cross party motion (all political parties present confirmed their support) will attempt to re-open the County Development Plan in order to rezone this land, from residential (A) to community (F). This motion will also include the rezoning of Clonkeen College playing fields, which the Christian Brothers in Deansgrange are currently attempting to sell. The is a very unusual and unique attempt by DLR Councillors to use their powers to try to halt the selling off of precious community assets in the County. This action will highlight at a national level, the necessity of the government to step in and deal with this growing problem at a higher level. 93 out of 105 school lands in DLR are zoned “residential”. The vast majority are owned by religious orders.

In order for the motion on June 12th to be passed, there must be a two thirds vote in favour. All 42 Councillors in Dun Laoghaire Rathdown County will have a vote.

If you would like to support this campaign, please contact these Councillors and let them know how you feel about this issue. The Parents’ Association and Board of Management in OLG are fully behind this campaign. A copy and paste list of the Councillors’ email addresses, as well as a sample template email, can be found here.

If you would like to read more about this Campaign, you can visit the OLG Concerned Parents’ Group links:

This one relates to the Dundrum Mental Hospital. The 20 acres there will go up for sale soon. Hundreds of houses/apartments will be built. This is in OLG’s catchment area.
www.independent.ie/business/personal-finance/property-mortgages/state-to-offer more-than-800-sites-for-at-least-50000-new-homes-35658572.html
print