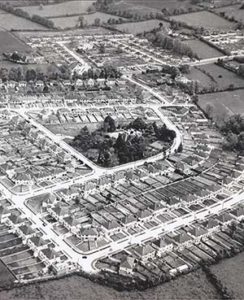 A longtime Roebuck resident, Mr. Joe Fahy of Larchfield Road, has written a fascinating memoir for the Association. We hope you enjoy it as much as we did. We would like to thank Joe very much, and to wish everyone a very Happy Christmas and a Peaceful New Year.

Autumn 1959: after a few months looking around north and south of the Liffey, Ann and I, newcomers to Dublin from Galway, were at a loss to find a suitable house within our financial means, until one day, a colleague in The Irish Independent advised me to have a look at a house in Larchfield Road. He himself was keen to buy it, but his fiancee would not take it, citing the very small kitchen.

We contacted the owners, Mr and Mrs. Condon, and we were fortunate enough to be able to purchase No.34. Mr. Condon threw in all his gardening implements for nothing. He and his wife went to live in England, but returned to Roebuck Park subsequently. They were a most gracious couple.

The same can be said of all the neighbours whom we got to know in the following years. A number of those who preceded us on Larchfield Road, or their families, are still here – Eileen Graham, the Walsh, Morris, Manahan, Dennehy, Stevenson, Rogers, Mooney, Robinson, Fay and Cullen families. All of those were here from the early 1950s, when the estate was built. The late Paddy Walsh told me he saw the sites being measured on green fields, and was able to point out where the old avenue to Roebuck Park House passed through our gardens.

At the time, many people thought that moving so far from the city was crazy – we were regarded as living in the sticks! Once past Bird Avenue, there was mostly open country. The 62 bus used rattle on up the narrow winding Goatstown Road, traces of which are still visible in Clonskea, at the end of Larchfield Road, and past the Goat Grill. As the double-decker turned a sharp right corner at junction of Goatstown Road and Roebuck Road, many passengers on the upper deck would fear it was going to turn right over! The bus terminated at The Goat, the last stop being right up against the high wall of Mount Anville convent grounds, which extended all the way around to the Lower Kilmacud Road.

There were very few cars on the road then, and many, including myself, took to the bicycle. In the city centre Garda points men directed traffic flows – there were no traffic lights in O’Connell Street. Cyclists were usually first up when the Garda signalled to stop! Traffic volumes started to pick up in the 60s, leading to more and more construction of roads and houses. For quite a number of years, though, Roebuck Park remained in the country, surrounded by fields, with a large farm existing opposite Larchfield Road, to which the children regularly resorted to see the cattle, and especially the O’Brien’s donkeys. The next big estate was Eden Park, and beyond that – nothing! We regularly walked across the fields to Dundrum and Rathfarnham, pushing a pram. There were also garden allotments where houses now stand on Taney Road.

I should say in the beginning, most residents in Larchfield Road, grew vegetables in their back gardens. Mr. Condon had left us a well-stocked garden, which we kept going for as long as we could, growing potatoes, cabbage etc. Eventually, with small children, and the pace of life picking up, most gardens were let into laws, and parts went under extensions. The road, of course, was bursting with young children, ranging in age from toddlers to teenagers. There were even some school bus services, and Mass buses on Sundays.

Residents were well served by the local businesses. The late Mr. Tom Finnegan in the Pharmacy was of inestimable help to parents of young families like ourselves – he was considered to be as good as any doctor in diagnosing children’s ailments, and he had customers coming from all over south Dublin – and it’s so good to see the business being carried on by John, Paula and all their staff. Other business families who served the estate over a number of years were the Griffins, the Coakleys, the Cowleys, the Leonards, the late Noel Walsh who ran a successful butcher shop for many years, and of course, the Lynam family, who have made such a great contribution to our well-being for decades!

In pre-television days, cinemas were the main sources of entertainment, and among the many venues we frequented were the Apollo, Dundrum (later replaced by an Arrow petrol station, then a Jet petrol station, and to-day’s Topaz). Then there was the Stella, Mount Merrion, now Flanagan’s furniture store, the Ormonde, Stillorgan, Classic, Terenure, Stella, Rathmines, and various others around the suburbs.

Dundrum itself changed almost beyond recognition. The McDougal family occupied the land where the first Dundrum Shopping Centre was built, and various changes were made to the road system. In June 1963, a cloudburst deluged the entire Dublin region – a tenement block in Fenian Street, around the corner from Holles Street Hospital, collapsed, killing two children, and houses fell in Bolton Street. That same afternoon, two adventurous youths paddled their canoes down Larchfield Road! Almost the entire tarmacadam surface of the recently-widened Goatstown Road was washed away, and huge slabs of the material piled up at the junction with Roebuck Road.

Over the years, we did think about moving elsewhere, and we looked at some new estates as they were developing, but in the end, the solid construction of our house, and more importantly, the friendliness of our neighbours of many years’ standing deterred us, and we have never regretted the decision to remain firmly implanted in Roebuck Park.

Click here to view a high resolution version of a photo of Roebuck Park from the 1950s. We believe this photo was taken by a resident from Larchfield Road, (Hans Cassini?), who worked with Rex Roberts Photography.

Comments, photos and other memoirs welcome!

Update 2/1/16 – To see a cine camera clip of the flood of 1963, visit the Goatstown Facebook page. See the post dated December 23rd. There is another relevant post on December 28th – 2 photos of Goatstown in the 1970s.