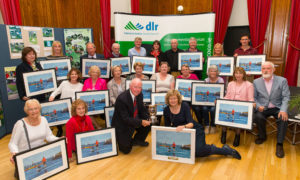 27th September 2017 – All the winners. Carol is first on the left sitting in the middle row. Photo by Peter Cavanagh

We won the Tidy Districts Competition for Best Housing Estate (201-500 houses) for the second year in a row!! This competition is for the whole of the Dún Laoghaire-Rathdown area. The winners were announced yesterday at the awards ceremony in County Hall in Dún Laoghaire. Carol from our Tidy District’s Team was there to collect the award.

As well as the lovely framed print, we get a nice fat cheque for €450.

We will put the break-down of the marks up on the website when we get them. In the meantime, all that remains to be said is congratulations to our Tidy Districts Team. Legends!

Update 15/11/17 – You can view the judges’ marks and comments here, www.roebuckresidents.com/tidy-districts-c…17-marks-awarded/